Skip to content
Home|Learn, Manage, Personal resources|Pain as an Art Form
Previous Next

Pain as an Art Form

Pain as an Art Form

Selections from the Pain Exhibit. To see a slide show, click here.

Pain doesn’t show up on a body scan and can’t be measured in a test. As a result, many chronic pain sufferers turn to art, opting to paint, draw or sculpt images in an effort to depict their pain.

“It’s often much more difficult to put pain into words, which is one of the big problems with pain,” said Allan I. Basbaum, editor-in-chief of Pain, the medical journal of The International Association for the Study of Pain. “You can’t articulate it, and you can’t see it. There is no question people often try to illustrate their pain.” 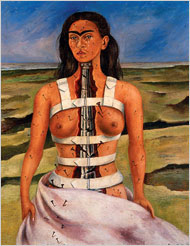 One of the most famous pain artists is Mexican painter Frida Kahlo, whose work, now on exhibit at the Philadelphia Museum of Art, is imbued with the lifelong suffering she experienced after being impaled during a trolley accident as a teenager. Her injuries left her spine and pelvis shattered, resulting in multiple operations and miscarriages, and she often depicted her suffering on canvas in stark, disturbing and even bloody images.

Sacramento resident Mark Collen, 47, is a former insurance salesman who suffers from chronic back pain. After his regular doctor retired due to illness, Mr. Collen was struggling to find a way to communicate his pain to a new doctor. Although he has no artistic training, he decided to create a piece of artwork to express his pain to the physician.

“It was only when I started doing art about pain, and physicians saw the art, that they understood what I was going through,” Mr. Collen said. “Words are limiting, but art elicits an emotional response.”

Mr. Collen wrote to pain doctors around the world to solicit examples of art from pain patients. Working with San Francisco college student James Gregory, 21, who suffers from chronic pain as the result of a car accident, the two created the Pain Exhibit, an online gallery of art from pain sufferers. The images are evocative and troubling.

“Some of them are painful even to look at,” Dr. Basbaum said. In November, he included an image from the site on the cover of Pain; it can be seen here.

Finding ways to communicate pain is essential to patients who are suffering, many of whom don’t receive adequate treatment from doctors. In January, Virtual Mentor, the American Medical Association Journal of Ethics, reported that certain groups are less likely to receive adequate pain care. Hispanics are half as likely as whites to receive pain medications in emergency rooms for the same injuries; older women of color have the highest likelihood of being undertreated for cancer pain; and being uneducated is a risk factor for poor pain care in AIDS patients, the journal reported.

Some of the images from the Pain Exhibit, like “Broken People” by Robert S. Beal of Tulsa, Okla., depict the physical side of pain. Others, such as “Against the Barrier to Life,” convey the emotional challenges of chronic pain. “I feel like I am constantly fighting against a tidal wave of pain in order to achieve some quality of life,” wrote the work’s creator, Judith Ann Seabrook of Happy Valley in South Australia. “I am in danger of losing the fight and giving up.”

Mr. Collen said the main goal of the exhibit is to raise awareness about the problem of chronic pain. However, he said he hopes one day to find a sponsor to take the exhibit on tour.

“People don’t believe what they can’t see,” Mr. Collen said. “But they see a piece of art an individual created about their pain and everything changes.”

To see a slide show of selections from the Pain Exhibit, click here, or visit the Web site to see the full gallery of photos. Another slide show from The Times in February features art created by migraine sufferers.